Lazy And Scared – Why We Refuse To Switch Homes Loans

Half of Australians aren’t confident in their home loan deal, yet two thirds haven’t switched and one in seven would never leave their bank – regardless of how big the discount.

That’s just some of the findings that were uncovered in uno Home Loans’ report which asked 1,500 Australian mortgage holders about their satisfaction with their home loan and their switching habits.

The report also revealed that Australians who have switched paid 13 basis points less on average than those who haven’t. Depending on how big your mortgage is, this seemingly small amount of basis points can translate into hundreds or even thousands of lost money each year.

Some of the main takeaways of the study were

This study highlights a distinct lack of confidence among mortgage holders coupled with inertia – 52% of Australians don’t believe they’ve found the best home loan deal, yet 63% haven’t switched and one in seven could never be persuaded to leave their current lender, regardless of the discount.

If you’re unhappy with your current home loan deal but stay on anyway, you’re effectively paying an inertia tax.”

Not The MTM Way

Long term readers will obviously know that one of the easiest and quickest ways to shave a huge amount of your mortgage is to get the best interest rate. I’ve always recommended reviewing your mortgage at least once a year (setting a reminder is best) and learning to Negotiate is another powerful way to get your rates down, however there seems to many other major reasons why most people don’t even try and change.

The study uncovered a significant financial benefit in switching. A comparison of interest rates revealed that people who have switched pay an average of 4.29% versus the 4.42% paid by those who haven’t switched.

Non-switchers are loved by big banks with higher rates of 13 basis points more on average.

On an average $500,000 loan, this would equate to $468 more per year, or $14,040 extra over a 30-year loan. Obviously this isn’t as big a savings as, say, setting your mortgage repayments higher and automating them but it’s still quite a significant amount.

For many it could even be worse if they’re just on the “Standard Variable Rate” which can easily be a full percentage point above others rates! 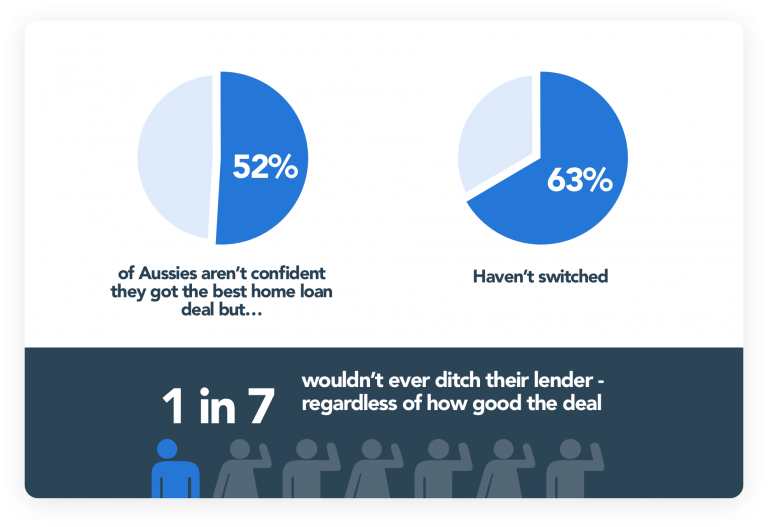 The study highlighted that despite their dissatisfaction, many Australians are fiercely loyal, spending a long period on the same deal and opting for well-known lenders. This isn’t a huge surprise but does seem to be a bit of a mental block seeing as no one I know enjoys giving away thousands of dollars, least of all so the big banks can profit even more! 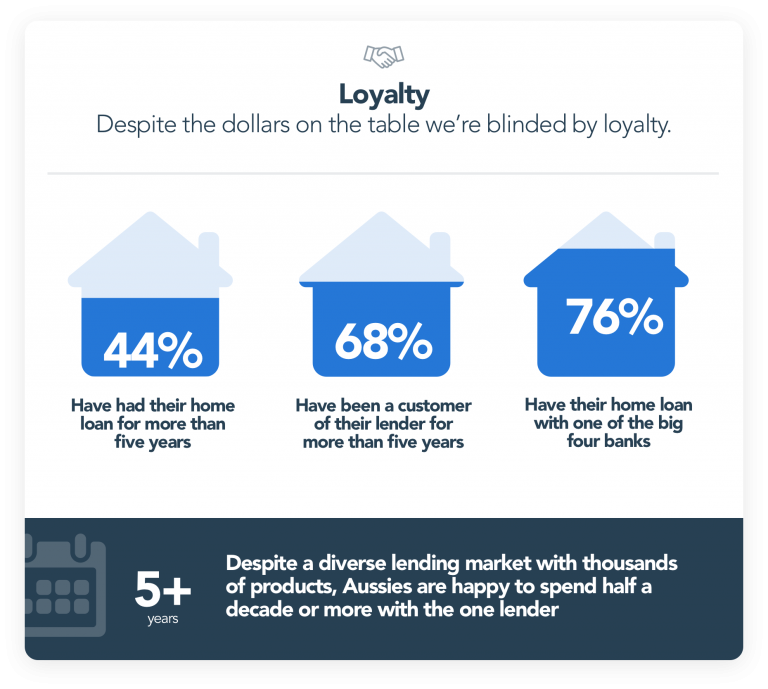 Laziness is also a big factor it seems when it comes to missing out on a good rate. More than two-thirds of Australians who haven’t switched say they’ve been turned off by the effort! 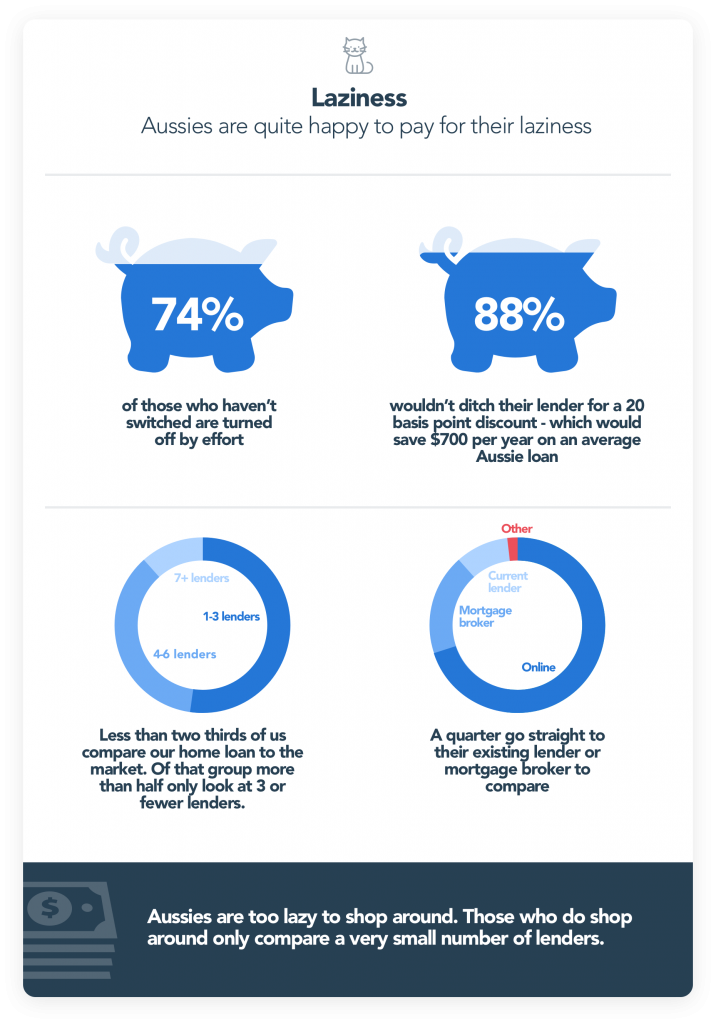 And many don’t even window shop. Only two thirds of mortgage holders compare their rate to the market and, of that group, more than half only look at deals from three or fewer lenders. More than a quarter just go straight to their existing lender or broker when they want a better deal which can actually be a smart move if you play your cards right.

This is because you might be able to get a better deal with your own lender – saving yourself the hassle of moving banks – just by calling and pointing out to them that you’re going to switch unless they match the other banks rate.

Shockingly, more than three quarters wouldn’t bother leaving their lender even for a 20 basis point discount – a saving that would equate to $700 per year on an average $500,000 loan!

Possibly one of the biggest surprises to me in this survey is that so many are uncomfortable with changing mortgage deals simply because they don’t want to talk to anyone about their finances!

Half of those who admit to not switching say the thought of having their finances reviewed by a third party puts them off.

Hopefully you’re all in excellent mortgage shape (thanks to this website!) so would be proud to show off your fantastic mutilation achievement but if not I’d highly recommend trying uno Home Loans mortgage brokerage service.

Full disclosure: uno Home Loans is one of our most recommended site partners. If you’re looking at switching banks, getting a better rate, saving money and also want to support this site it’s a fantastic way to do it! You can save literally tens of thousands of dollars off your mortgage just by clicking the banner below and getting started!

BONUS! – If you refinance your mortgage through uno Home Loans using the below banner link and email us the confirmation letter (admin @ mutilatethemortgage.com) we will give you free access to the How To Pay Off Your Mortgage Early course for life!

This reason you can sidestep this fear is because uno is an online mortgage brokerage service. Using uno means you don’t have to share all your personal information with another person as the whole process is essentially done all online now. There are some documents that need to be signed by the lender later on in the process, but for the most part it’s all online.

Thus, there’s a lot fewer feelings of being uncomfortable. They do obviously still have experts you can talk to at any time – even on the weekend! – plus are also working on making the entire process end-to-end all online eventually.

uno is also a rather unique mortgage broker service and is one of our partners for this site for a good reason! When using a regular broker – even though most of them are great and they make the process easier – it still doesn’t guarantee the best financial outcome for you. Generally a typical broker will only present you with a couple of options at best which means without doing a bunch of work comparing the market yourself there’s no way of knowing if you’re getting the best deal.

As another interesting statistic, 75% of traditional broker originated loans go to 3 big banks! By contrast 75% of uno originated loans are split between 12 lenders. This gives you an idea of how much more choice uno gives its clients over your normal run of the mill brokers.

uno on the other hand has an engine with literally 10s of thousands of lender rules in it. The more data you enter in, the more accurate the results it provides are. This is especially important not just so it can suggest a loan at a good rate, but because it means you have a better chance of finding a loan you will actually get approved for.

If you use a more traditional broker that doesn’t take this into account you may end up applying for and being rejected from a loan. This then puts a bad mark on your credit file and you’ll then need to explain yourself out of a bad situation when you eventually apply for another loan – not to mention time costs.

So as you can see, uno not only gives you a bigger choice resulting in more savings but also allows you to sidestep the issue of discussing your finances as their computer systems do the work, not people. 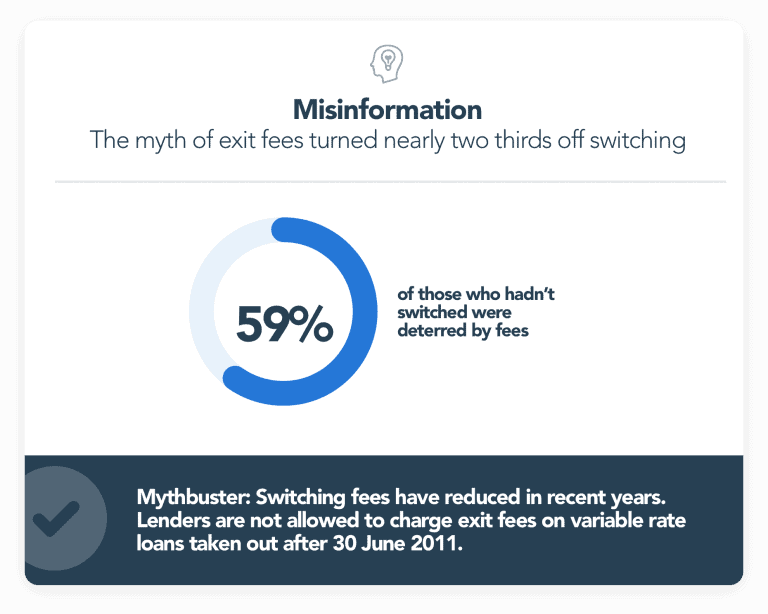 Fees also put many borrowers off switching, with nearly two-thirds saying that exit fees are a deterrent to switch and save. This is despite the fact that lenders are no longer allowed to charge exit fees on variable rate loans taken out after 30 June 2011.

In many cases, people estimate exit fees to be higher than they actually are. Rule changes have meant that exit fees have come down significantly in the last few years and can end up being only a couple of hundred dollars.

I’d encourage Australians to put in perspective the roadblocks that turn them off switching their home loan. Is the inconvenience of putting in a couple of hours’ effort switching home loans or the discomfort of having a conversation about your finances worth saving $14,000?

Interest rates are at historically low levels, so it’s a great time to push through the roadblocks that have prevented you from switching and trade up to a better deal.

He makes an excellent point and one we’ve always maintained here. How much is your time worth? $25/hour? $50/hour? $100/hour!?? Whatever it is, it likely can’t hold a candle to how much you’re going to save by putting some time towards Mutilating your mortgage.